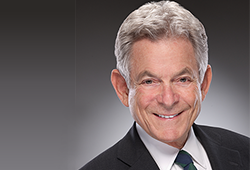 The course of my life and that of my future family changed with an unintended meeting in my high school days. As a result, my relationship with Wake Forest transformed from no plans to estate plans. I now view the University as part of my DNA, which is why I committed to a planned gift and believe so strongly in that vehicle of support.

I had decided on attending a university other than Wake Forest and had no reason to think anything would change that until I participated in a high school debate tournament judged by Frank Shirley, the distinguished director of debate at Wake Forest. He approached me after the debate and said I'd have the opportunity to be on his travel squad from my first year. In a matter of minutes, my college decision changed.

I participated in debate for all four years and loved every minute of it. Even the long drives in Frank Shirley's car.

On the day I arrived, I learned an unwritten rule of campus life: Say hello to everybody you pass on the Quad. And that really resonated with me. It was a small but daily expression of Pro Humanitate.

My ties deepened when I decided to stay at Wake Forest for law school. Years later, I was thrilled when my sons Taylor ('13) and Ben ('16, MD '21) followed me as Wake Foresters. Every five years, several of my classmates would gather for Homecoming at Graylyn to reflect on our time in school and what has followed. My college roommate, Ted Meredith, and I have enjoyed hosting this event.

In light of all that, the power of establishing a planned gift became undeniable. It makes a compelling statement about the emotional and practical value of a legacy.

And it tells us that sometimes, the best plans come out of nowhere.